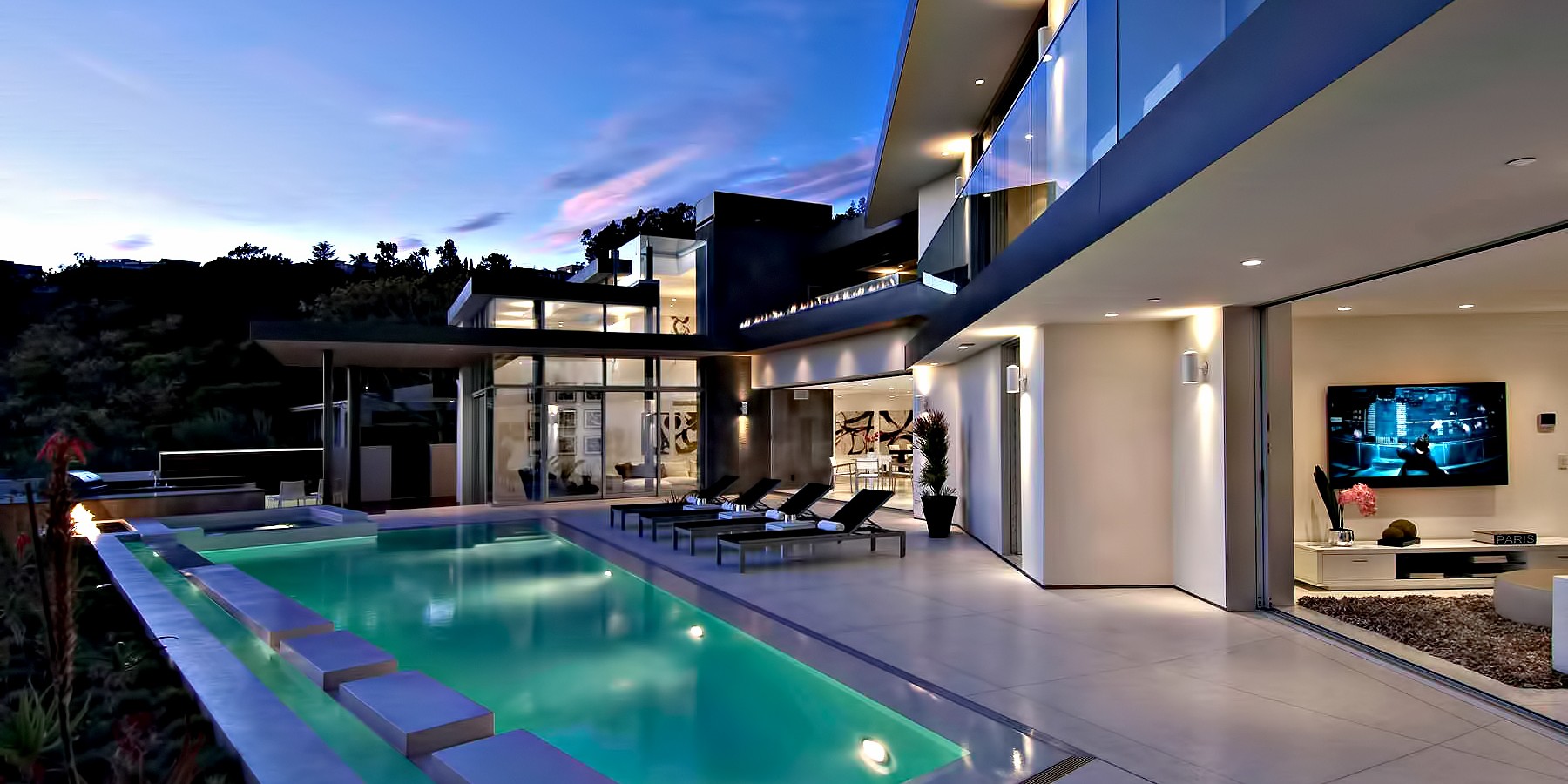 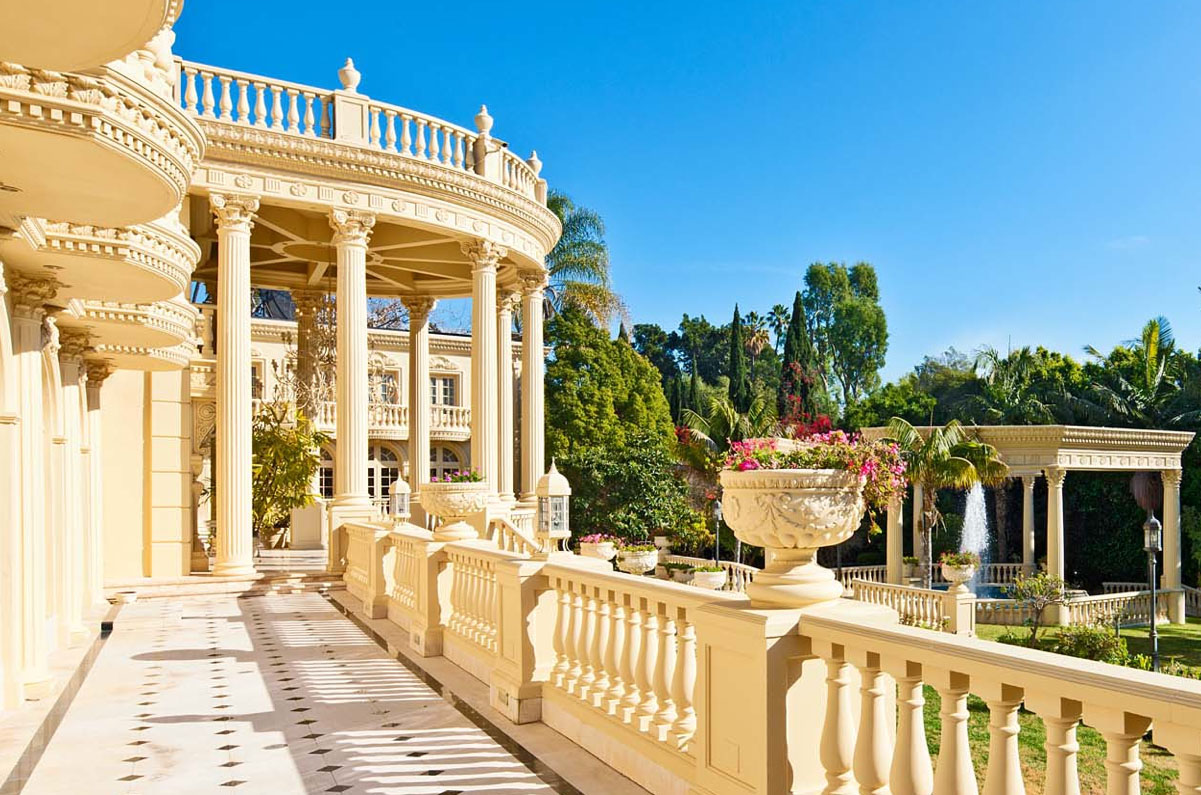 Bel Air is an affluent residential community in the hills of the Westside of the city of Los Angeles, California.[1]Together with Beverly Hills and Holmby Hills it forms the Platinum Triangle of Los Angeles neighborhoods.  Small and tight-knit, Bel Air is an affluent city in the Westside. It is often associated with Beverly Hills and Holmby Hills and has been a prime location for many Hollywood directors both in television and film.   Founded in 1923, Bel Air has no multifamily dwellings.   Bel Air is situated about 12 miles (19 km) west of downtown Los Angeles   and includes some of the foothills of the Santa Monica Mountains. It borders the north side of UCLA along Sunset Boulevard. At the heart of the community sits the Bel-Air Country Club and the Hotel Bel-Air. The community was founded in 1923 by Alphonzo E. Bell, Sr.    It is bordered by Brentwood on the west and southwest, Westwood on the south, Beverly Hills Post Office on the east, and Sherman Oaks on the north. Bel Air is home to numerous Hollywood celebrities and high-profile corporate executives.   The Bel Air Association has been operational since 1942, dedicated to preserving the life-style and property-values of their residential community. The Bel Air Association is located at the entrance of the East Gate of Bel Air at 100 Bel Air Road.

With amazing views and beautiful details, the Bel Air community creates an idyllic atmosphere that many potential homeowners fall in love with. Current Bel Air real estate listings feature a variety of available homes—from ranch-style houses to grand mansions—that suit the desires of the most discerning buyers. The community, located in Westside Los Angeles, California, is one of the most affluent and well-known communities in California. The area offers residents a luxurious, but family-friendly atmosphere. Since its founding in 1923, many well-known families have made their homes in the area, including President Ronald Reagan and his family. Some of the most notable actors, entrepreneurs, and athletes have chosen to reside in the region. Nestled in the foothills of Santa Monica, the luxury Bel Air homes for sale offer spectacular views. Interested buyers should start their search for ideal Bel Air estates with Linda May Properties.

The  Elegance of Bel Air

The beauty of the Bel Air area is preserved through city ordinances that control architectural styles and lot sizes, among other things. None of the houses in Bel Air are overdone or gaudy. Instead, each house exudes a sense of understated elegance that inspires a sense of appreciation for the architecture. Due to the city ordinances, the area will always retain this sense of class, which has been with it since its founding. Linda May Properties can introduce prospective buyers to the wide range of Bel Air mansions and houses that are currently on the market. These expansive Bel Air estates and mansions for sale have architecture that is both beautiful and graceful. The elegant landscaping of every home matches the relaxed but sophisticated feel of the entire community. Whether you are searching for a home that has a post-modern feel or is reminiscent of an Italian villa, Linda May will help you find your perfect home.

For families interested in settling in the area, the community’s schools are an important feature to take into consideration during the buying process. Bel Air is located within the Los Angeles Unified School District, which is within Board District 4. The community is close to many prestigious pre-collegiate schools, as well as the University of California, Los Angeles campus. The public schools within the area include Roscomare Road Elementary, Warner Avenue Elementary, Emerson Middle, and University High schools. The private schools in the area are Marymount High, Stephen S. Wise Temple (K-12), John Thomas Dye (K-6), and Westland. The American Jewish University is also situated in the midst of the Bel Air community. These quality, prestigious schools fit the needs of the diverse families living in the area.

Living in Bel Air gives residents the benefit of being near the vivacious city of Los Angeles while still living in a more traditional community. Located about twelve miles west of downtown Los Angeles, residents can shop and dine at their leisure, while still remaining near home. Not only are there many great options for shopping and dining, but there are many attractions as well. Some of these attractions include: the Getty, the Los Angeles County Museum of Art, the Museum of Television and Radio, the Museum of Tolerance, the Skirball Cultural Center, the Page Museum La Brea Tar Pits, Sony Picture Studios, Pacific Park on the Santa Monica Pier, and the Venice Boardwalk. The community also offers many great country and garden clubs that will help where residents engage with each other through different activities and relax during your leisure time. The prestigious Bel Air County Club is one of the clubs and is located at the heart of the community with easy access to all of the homes for sale in the area.

Holmby Hills is one of LA’s elite and most expensive neighborhoods, easily recognizable by its unique and beautiful street lamps. It is located on the Westside of Los Angeles and is split by the famous Sunset Boulevard.

Holmby Hills is a neighborhood in the district of Westwood in western Los Angeles.

The neighborhood was developed in the early twentieth century by the Janss Investment Company, which developed the rest of Westwood as well as other Los Angeles neighborhoods. With the expansion of Sunset Boulevard, Holmby Hills was split into two northern and southern sections, each lying within a different community plan area designated by the City of Los Angeles: The portion south of Sunset Boulevard is the area north of Wilshire Boulevard and east of both Beverly Glen Boulevard and Comstock Avenue, and west of the Los Angeles Country Club; it is located within the Westwood Community Plan Area.[1] The portion north of Sunset is the area east of Beverly Glen Boulevard and west of the city limits of Beverly Hills, with Greendale Drive and Brooklawn Drive as its northernmost streets; it is located within the Bel Air–Beverly Crest Community Plan Area, though it is historically distinct from the neighborhoods of both Bel Air and Beverly Crest.[2][3]